Clothes aren’t exactly the cheapest thing in the world. Falafel sandwiches they are not. That’s why it really sucks when you accidentally spill an entire jar of spaghetti sauce and a coffee and some iodine all over your brand new expensive jeans or shoes. What can possibly be done? Well, you can throw the item of clothing in the washer with some bleach or whatever but we both know that frock will never be the same again. If only there was some kind of space age technology that made it so clothing could never be ruined no matter how clumsy you were.

It’s here! It’s called LiquidOff and it’s off the hook. That hook being that jar of spaghetti coffee iodine sauce. Basically you treat your clothing with this stuff, as it sprays on. Then let it work its magic. It creates an impassable and invisible layer around said article of clothing, making liquid absolutely unable to stick. You could go outside and have it start raining literal cats and dogs, like ground up absolutely horrific dog and cat parts, and your clothes will be absolutely fine. Yes! Also, I really hope that horrible cat and dog thing never, ever happens. That’s some apocalypse stuff right there.

LiquidOff isn’t available in stores as of yet, but it will be soon. In the meantime you can hit up their Kickstarter to preorder some clothes-saving spray for yourself. The price is also right. A bottle will set you back around $55, although they offer bigger bottles for much bigger prices. Intimacy 2.0 – The Invisible Dress You Can Wear 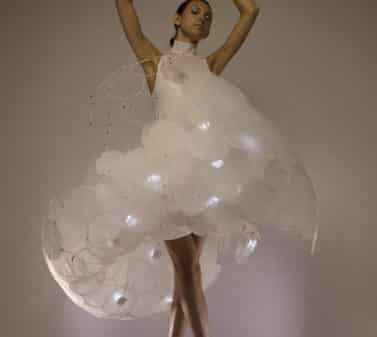 This Dress is Made From Magnets and Iron VJacket is a wearable controller for live performances The Un-Knitting Machine turns your sweaters back into yarn The Suunto Core – A Sports Watch With Core Features