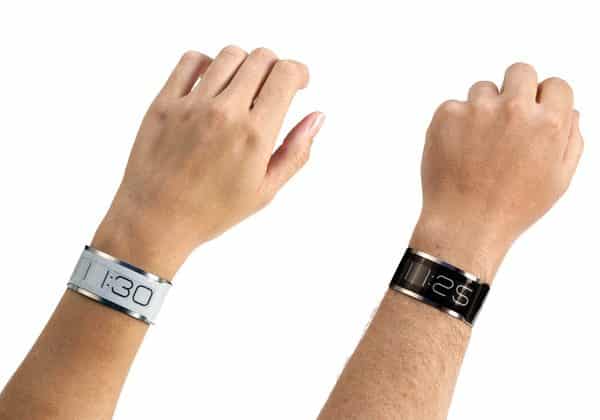 One thing common amongst all of the burgeoning smartwatches that keep popping on to the scene like useful zits is that they all tend to be about as thick as the dumbwatches of yesteryear were. Of course, technology tends to shrink faster than a dude’s privates in cold water, so this won’t always be the case. For now, though, it seems to be. Samsung’s forthcoming watches seem to repeat this trend, as does Microsoft’s rumored foray into the smartwatch world. One company, however has said ‘screw you’ to all of that and have just announced a super-thin smartwatch that also happens to be flexible enough to wrap around your wrist like a slap bracelet.

E Ink has just unveiled an uber-flexible smartwatch that fits around your wrist snugger than a bear giving one of its signature hugs. Also, just in case you weren’t paying attention, this smartwatch is so very thin. How thin? It hasn’t eaten in at least sixty days. Somebody give this watch a hamburger! The company sharpened its teeth creating e-ink screens for e-reading machines, such as the Kindle and the Nook. However, now they’ve gone full on smartwatch and it is a good thing they did. Even cooler? The design of said watch is completely customizable. You can make it yourself or simply download a pre-made design from someone else on the Internet. We are about to enter a new age of DIY watchfaces and I for one could not be happier about it.

The company will be showing off more about this watch in the months to come. As such they have announced no release date or pricing. We’ll let you know when we know. Polar RCX5 training computer will get you into shape What Foxconns Smart Watch Might be Able to Do