This Bracelet Keeps Handy Track of Your Finances Money. It’s the root of all evil and yet, also, the root of being able to eat and have a roof over our heads. So. yeah. Money is what scientists often refer to as a “necessary evil.” Wait, scientists don’t actually say that. OK, maybe I meant television lawyers. In any event, stuff is expensive and us lazy folks out there need a handy and dandy way to keep track of our ever-shrinking bank accounts. We could actually, you know, stay on top of it the old fashioned way but where is the tech-heavy fun in that? No, what we need is an awesome bracelet that does the heavy financial lifting for us.

Introducing the appropriately named Token, an armband that does just what was described at the end of ye olde last paragraph. It allows you to keep constant track of your finances via a readable display on the bracelet itself. Even cooler? It uses NFC technology to actually allow you to buy things using just the bracelet. No longer will you have to abide with the annoying two seconds you waste digging your wallet out of your pocket. In case you were worried about the safety implications, the Token bracelet needs to recognize your heartbeat and/or fingerprint, not to mention a security code, in order to work. The future is just so futuristic.

The Token is just a working prototype for now and, according to the inventor, requires some serious infrastructure building in order to make it a consumer product. In other words, you’ll be forced to do all of that annoying pocket digging for a while longer. Boo. Hiss. Previous Post
This Wearable Sensor Can Tell if You Are Relaxed, Focused or Stressed
Next Post
Fleksy Brings Predictive Messaging to Samsung’s Gear 2 Smartwatch Fujitsu’s Gesture Controlled Glove is a Throwback to the 1980s 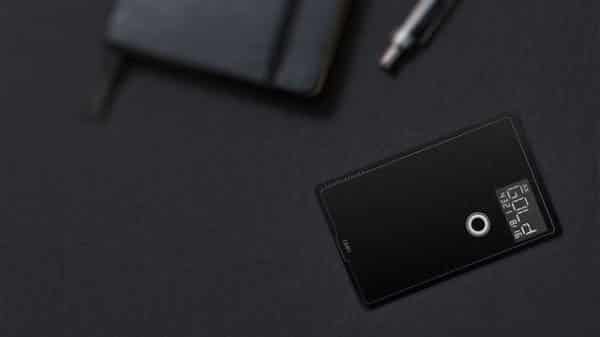 This Tiny Card Looks to Replace Your Wallet Fitbit Force Fitness Bands Are Vying For Your Wrist-Space MEMI Wristband is a Smartbracelet Made For Women Nex Band is Like a Video Game Console on Your Wrist