Apple’s Fitness+ service will launch on 14 December, offering Apple Watch users the chance to get sweaty from home.

For the uninitiated, Fitness+ is a subscription workout platform that exclusively uses the Apple Watch (Series 3 or later) for intensity and workout metrics.

Users can access guided and video workouts, accessed on their iPhone, iPad or even Apple TV.

According to Apple, the trainers are geared up to get users to check their heart rates mid-workout, and there’s also a “burn bar”, which shows how intense you’re working.

The idea is that you get a visual feedback on your effort levels, and whether you can push a bit more. It’s not about being faster or better – just making sure you get the most out of a workout.

And when you close an activity ring, it’s shown right there on the screen.

It’s designed to be done with zero or minimal equipment, with most aspects requiring nothing – or at most a set of dumbbells. However, there are workouts for those with bikes, rowers and other more expensive equipment.

It’s an exciting service, and Apple is clearly looking to hook users in with high profile trainers. Natural comparisons will be made with Peleton, but also other services like Fiit which also use the Apple Watch to record metrics.

The service is set to cost £9.99 a month or £79.99 a year. It’s bundled with the new Apple One subscription plan, and as you might imagine, works well with Apple Music integrations. It’s set to launch in Australia, Canada, Ireland, New Zealand, the UK, and the US. Having a hard time finding spider silk? Get your garments made from hagfish slime Google Glass Can Sustain A Shower 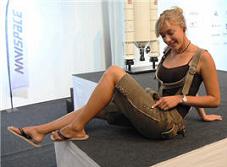 Vybe – The Device That Won’t Let You Lose Your Phone Jawbone’s Up fitness tracker receives some much needed upgrades